Knowing how to choose a motherboard takes you a step further into building a PC without the help of any tech guru.

It also helps you understand the value of the money you spend on purchasing a whole computer set.

The market is flooded with different types of motherboards, and it can be challenging to choose which one is best for your PC.

Sometimes, you might even end up trusting a store technician to choose PC components on your behalf.

Understanding what to look for in a motherboard ultimately means you are also gathering knowledge about various components you can attach to it.

It can be a very tedious process, but it can be a fun experience if you love computers and enjoy building them.

How Do I Decide What Motherboard To Buy?

There are questions you need to answer for yourself before purchasing a motherboard.

And every answer can take you a step further into making a final decision.

1. For What Purpose Am I Using My Computer?

It could be your first time assembling a computer, and you may have a purpose for building it in the first place.

You could be an avid gamer, and a particular game that piques your interest could have precise requirements.

Alternatively, you could be needing a PC for your profession.

You might need one for computing, developing software, designing stuff, or editing images and videos.

Then again, there are those long-time PC-building enthusiasts who simply enjoy putting parts together.

If so, you wouldn’t need our help now, as you probably already know the next generation motherboards even before they reach the shelves.

In any case, when choosing a motherboard, check with the manufacturer if a particular board can be tailored to your specific needs.

Motherboards vary in how each one maximizes the processing speeds of its attached components.

Some do not allow more than stock speeds, so choose a board that can provide the overclocking capabilities you require.

There are several manufacturers of motherboard chipsets, but the two top-rated brands are Intel and AMD.

If you spend some time reading about PC processors, you know that these two companies have competing models at every innovation stage.

Computer enthusiasts can give excellent online advice about the pros and cons of choosing an AMD over and Intel and vice versa.

Sometimes, their reviews have even more substance than the online marketing brochures from each of the brands.

A lot of reading can help you decide between an Intel and AMD CPU.

4. What Motherboard Should I Get?

The tech market is diluted with so many motherboard brands and models.

A profusion of third-party reviews can either help you reach a decision or get into a stalemate.

To make things easier, we give you this list of the top-ranking brands that continuously compete in bringing the best motherboards.

5. What Size Motherboard Should I Get?

The form factor is one primary determinant of how extensive computer components can be.

Sometimes, a larger form factor equals more slots for any of the primary components.

Motherboards come in various shapes and sizes, allowing you to customize the components you choose and your overall PC build.

While ATX is the de facto standard because it offers the most space, other less common boards come in the Micro-ATX or Mini-ITX form factors.

If you have a lot of space, go for an ATX and a full-size tower case.

However, if you have less space or need a home entertainment PC, go for a smaller Mini-ITX or Micro-ATX board and pair it with a small PC case.

How To Choose a Motherboard

The following is a comprehensive compilation of what to look for in a motherboard.

Study each one, and it won’t be long before you can have a complete, well-thought-out answer to the question: what motherboard should I get?

The space where a computer stores information while the CPU and GPU are both working is called Random Access Memory or RAM.

Most modern mainstream PCs have at least 4GB RAM, which can be increased to 128GB.

The largest modules available right now have a 32GB capacity, and new motherboard models can hold up to four RAM modules.

However, smaller motherboards only have two RAM slots, which means the maximum RAM on such boards is 64GB.

Having only two RAM slots is not much of an issue, though, since computers work pretty smoothly with the right CPU, GPU, and even just 16GB of RAM.

Storage drives are particularly limited only by the number of SATA and M.2 ports on a motherboard and the built-in storage capacity.

On average, a motherboard can have at least six SATA ports and one M.2 slot.

A computer storage device can either be a hard disk drive (HDD), a solid-state drive (SSD), or a hybrid of the two.

HDDs have internal moving parts that make them less durable than chip-type SSDs.

In comparison, SSDs read and write information at faster speeds than HDDs.

The downside to SSDs is that the current market only sells them in capacities between 256GB and 2TB.

The largest capacity HDD money can currently buy offers a capacity of 10TB.

You don’t need that much space unless you’re planning to build a server computer. 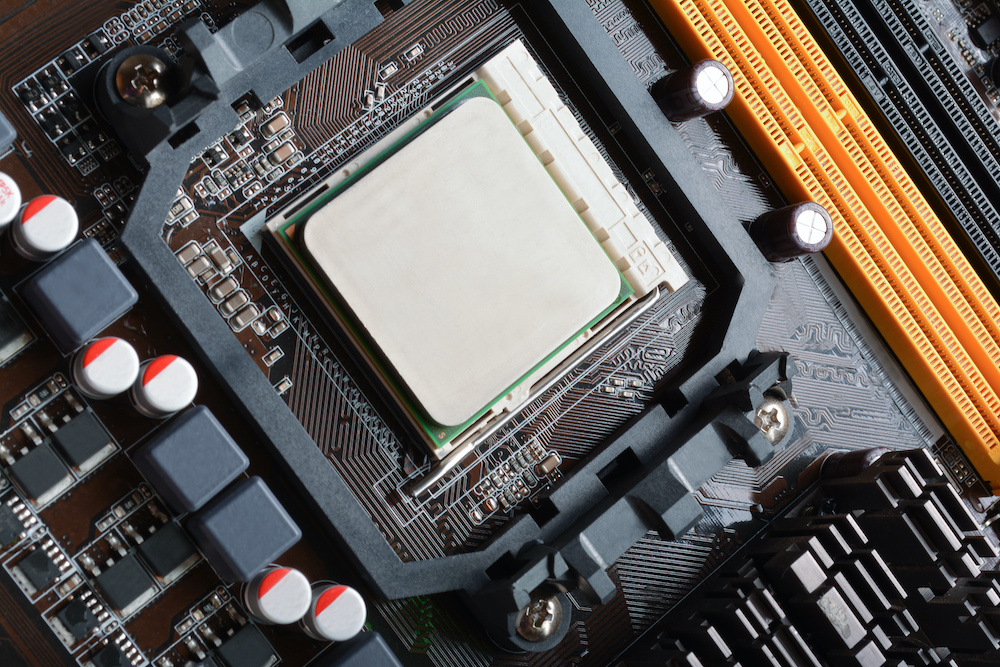 The number of expansion slots on a motherboard determines the expansion options available for your PC build.

The number of lanes regulates how many information bits a slot can transfer per cycle.

Get a motherboard with adequate GPU support if you want a PC that can flawlessly handle high-end graphics.

Most GPUs require a PCIe x16 slot to function at total capacity.

While some motherboards have only one PCIe x16 slot for a graphics card, others have multiple GPU slots.

These allow simultaneous operation of two or more graphics cards.

A reliable motherboard should have adequate headers for device cooling.

Heatsinks are installed where most heat is generated.

However, installing fans and cooling tubes can ensure that every component does not reach the maximum allowable heat.

Not all motherboards permit overclocking, and the capacity to overclock depends on the choice of CPU, RAM, and device cooling.

Check the bus speed on a motherboard if you want to use it for overclocking.

Bus speed is measured in megahertz. It refers to how fast data can move across the front side bus (FSB) between the CPU and the RAM.

FSB speeds on most motherboards range from 66MHz to 83MHz.

In addition to the DIMM, PCIe, SATA, and M.2 slots, a motherboard has internal and external connections for other components.

Consider your requirements carefully so that you can accurately choose the best motherboard for you.

Internal connections are located directly on the motherboard, which means they will be hidden inside the PC case.

These internal connections are meant to connect to external ports on the PC case’s front, top, or side panels.

Other items that need to connect to the motherboard internally include system cooling devices and RGB lighting systems.

Alternatively, external connections on a motherboard are the primary I/O connections lined up in an exterior panel attached to the board.

It houses the primary USB, display, audio, and networking ports.

USB ports have many variations that differ in transfer speeds and connection types, so opt for the boards with speedy USBs.

For display, check if you’ll be needing a VGA, HDMI, USB Type-C Thunderbolt, or DVI connection.

Most recent motherboards have built-in Ethernet, but if you want to go wireless, spend a little more to get a Wi-Fi-ready board.

If you like movies and music or if your work requires audio input and output systems on your PC, consider the included audio codec on a motherboard.

Check if it is enough for providing quality sound for your tasks, or deliberate whether you need to expand with a sound card on one of the PCIe slots.

You may be on your way to learning how to overclock or even to diagnose a motherboard.

On and off switches can be helpful during the initial build process or any firmware upgrade.

Aesthetics should not be the first thing you think of when learning how to pick a motherboard unless, of course, you want to create an entirely aesthetic build.

A motherboard can have a plain color, or it could have design decals printed onto it.

Sometimes, the design of a board can sway prospective buyers into buying just because it looks incredible.

Some motherboards have built-in aesthetic lighting and even RGB and ARGB connectors.

These purely aesthetic features are wow factors that do not affect general performance.

Carefully keep a focus on what you need, and deal with aesthetics as an extra.

If you want a high-end motherboard that offers optimum performance and allows aesthetic features, check out our recommendations for the best RGB motherboards.

How Much Should I Spend on a Motherboard?

Deciding how to pick a motherboard is also dependent on your budget.

Motherboard manufacturers offer many tiers of boards that come with varying qualities and features in various price ranges.

You have to be careful when choosing a motherboard.

This is unlike most Intel chipset boards in the same pricing that can only run at stock speeds.

Watch out for sale events, though, as more expensive boards sometimes fall under this low price range.

Boards with built-in Wi-Fi and variable aesthetic connectors appear in this price range.

Be careful about other features, though; you might be sacrificing quality and performance for components you may not need.

Anything around 200 bucks can be considered premium-tier motherboards.

These boards will have more options for expansion, and you will start seeing better heatsinks and VRMs.

These components are essential for overclocking.

You might want to revert to a lower tier if you still have to choose components like CPU, GPU, and RAM.

The more money you spend, the more value you should get.

You should find extreme overclocking features in this tier, combined with multiple expansion, memory and storage slots, and quality-grade VRMs.

A motherboard in this price range should offer exceptional audio, Ethernet, Wi-Fi, and multiple connectivity options.

You should also find improvements in RGB aesthetics and cooling connections.

Some motherboards can be overpriced, so keep on comparing. You may be able to find competing models that sit on very different price tags.

Additionally, you never know when you’ll come across a top-tier motherboard that is sold on a relatively low price range.

How Do I Know Which Motherboard To Buy?

Learning how to choose a motherboard is relatively straightforward. First, consider your price range, and then list down all of the components you need.

Your preferences and requirements should dictate the final components of your PC build. Sometimes, it all boils down to your choice of processor.

Manufacturers make it a habit to compete and provide the latest PCBs for continuously evolving processors made by top brands, such as Intel and AMD.

The choice is ultimately yours.

If you prefer Intel Core X-series processors over other brands, check out our recommended X299 chipset motherboards.

On the other hand, if you are a die-hard Ryzen fan, the best B450 motherboards can take your PC build to a whole new level.