Diving deep into PC game video and video editing performance requirements can be quite intimidating.

This is especially true when you’re bombarded with technical terms, such as FPS or frame rate.

Even if a particular hardware or software product has so many indications of frame rate capacities, choosing one for your video requirements can prove difficult.

When it comes to computers, we know that CPU, memory, and GPU components all work together to provide the best FPS for any particular task.

In that case, does motherboard affect FPS?

With this guide, we’ll give you a better understanding of FPS, its importance, and its dependence on PC motherboards.

FPS is an acronym for “Frames Per Second.”

It is a unit of measurement for a computer’s display frame rate, the quantity of consecutive full-screen images a computer displays every second.

Our eyes can process an average of 12 separate images every second, ultimately meaning that a frame rate of 12FPS can display motion.

However, in computer displays, a frame rate of 12FPS can be very sloppy.

Films typically use a frame rate of 24FPS for smooth movement transitions.

Video cameras and high-end capture devices can record with a frame rate of 30FPS or more, providing the smooth motions we see on screens.

In comes display resolution, which is a whole other factor.

With a higher resolution, an image has finer pixels.

As such, a batch of high-res frames in sequence can have even smoother transitions using a better frame rate.

Why Is Frame Rate Important?

FPS has a big impact on the viewing experience of a video.

The choice of frame rate involves several factors, including a decision to incorporate slow-motion scenes and motion-blur effects.

The video frame rate will also affect how realistic a video can look.

Some computer functions may only require the standard 24FPS frame rate for viewing the world with our eyes.

For example, pros creating animated GIFs from scratch will use lower FPS as they sacrifice detail for smaller file sizes.

PC games, video editing software, and 3D manipulation apps tend to have many things happening on-screen all at the same time.

A higher frame rate ensures that items on display have smooth motion transitions while keeping details crisp and intact.

When considering the frame rate for your choices of PC components, you might be wondering if the motherboard can have an impact.

All the signals between your processor, graphics cards, memory modules, and storage drives pass through the motherboard.

Since the motherboard is the central hub for all the PC components, it would somehow affect FPS.

However, the effect on frame rate should be minimal and will only depend on board layout efficiency and component quality.

This list discusses the possible avenues for indirect frame rate adjustments as an effect of motherboard components.

Many components attached to your motherboard use electricity to complete all assigned tasks.

On the one hand, the CPU and the graphics card draw power from the PSU through the motherboard’s circuitry.

On the other hand, VRMs act as the primary power delivery systems for processors and graphics cards.

With high-quality VRMs, a CPU or a GPU can run smoothly and deliver the required frame rate for a particular PC activity.

Cooling ensures that the motherboard dissipates enough heat regularly so that PC components can function at optimum levels.

PCIe slots are the primary expansion ports of a motherboard.

Through them, graphics cards communicate with the CPU and the memory modules.

In that case, we recommend that you go for motherboards with multiple x16 PCIe slots to enable multi-GPU and take advantage of better FPS. 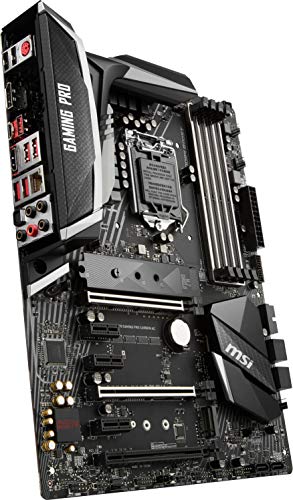 When it comes to memory and storage, operational speeds can indirectly affect FPS.

With high-quality, high-capacity memory slots, you allow your PC components to communicate at faster speeds.

While some storage interfaces also use PCIe lanes, storage communication speeds depend on SATA and M.2 connections.

How you set up your applications can affect FPS.

If you have your OS on a separate drive other than your games or graphics software, they will not populate the same connections with the motherboard.

Finally, since all of your motherboard components run regularly, they will need good quality materials for service longevity.

It all boils down to the grade of every large or tiny component on the motherboard.

You may have a very good processor on hand, but you won’t be able to get the most out of it with a low-tier motherboard.

The motherboard always deserves some nitpicking, and you can benefit from it in the long run.

Alternatively, do not forget to look for all of the connections you need.

For example, choosing the correct motherboard for the Ryzen 7 3700x processor involves checking out available expansion slots for multi-graphics functions.

You might miss out on higher frame rates just because you forgot to check if a board supports all your GPUs.

It is why enthusiasts include their choice of a motherboard as a factor that contributes to higher or lower frame rates.

A good frame rate can provide extra-smooth animations, low latency, and minimal distractions, and, in effect, a competitive advantage.

While frame rates depend on several sources, the latest graphics cards can increase this competitive advantage to a whole new level.

Refresh rate equates to the number of cycles a display device refreshes per second, and we measure it in Hertz.

Both refresh rate and frame rate describe a completion frequency, but by different components of your PC.

FPS refers to the rate at which your graphics card completes frames, while Hz tells you how frequently your monitor delivers those frames.

Depending on the graphics card and the image frames it tries to render, the frame rate can be higher or lower than the refresh rate.

Combining an exceptional frame rate with a high-quality display ensures that your monitor can catch up with the number of frames your graphics card renders.

If you have more frames in the least amount of time, the display shows smoother animations.

For example, it would be easier to track your target and deliver the killing blow in a first-person shooting game.

A higher frame rate lets you micro-manage your aim and avoid overshooting and undershooting.

Of course, other factors, such as your keyboard and mouse sensitivity, also contribute towards a better aim.

When trying to reduce system latency, a higher frame rate per display refresh will allow you to see on-screen objects earlier.

It makes the application feel more responsive between mouse movements, giving you a competitive advantage in gaming.

Ghosting is a distracting phenomenon that happens on most LCD screens.

As the screen refreshes, pixels do not change color instantaneously, leaving trails after moving objects.

If the frame rate per display refresh is exceptionally high, ghosting can be minimal or avoidable.

Other factors that can affect system latency include network and wireless connections.

If the frame rate of a graphics card does not match the refresh rate of a display, some image tearing can occur.

You will notice an image shift or a horizontal tear across the display.

The goal is to match the display refresh rate with the graphics card’s rendering time for the next frame.

Motherboards do not directly influence the frame rate of any particular game or video software.

Frame rate capacities will all fall on the capabilities of your other components.

A motherboard can indirectly affect FPS depending on many reasons, including PCIe lane layout, system bus optimization, and quality of components.

It can allow a slight difference in performance, ranging between 1 or 4 FPS.

It can be a negligible increase in frame rate, considering that a better motherboard build with improved components can cost so much more for just that.

These factors fall under the scrutiny of extreme overclockers when it comes to choosing their motherboards.

With that said, you can improve FPS better by focusing on the features of your CPU, GPU, RAM, and storage devices.