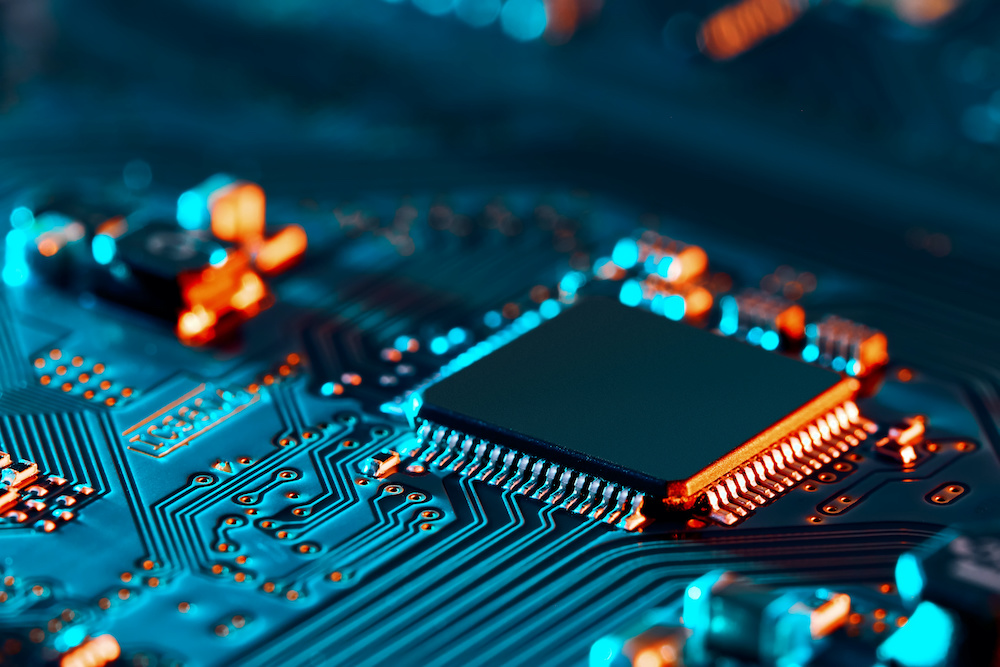 Parts of a Motherboard and How They Function

Since the advent of the integrated circuit, computers have evolved into more sophisticated machines that combine highly complex components.

The single most complex component of a modern-day personal computer is the motherboard.

A motherboard is a thin plate with embedded conductive tracks for providing electrical power and communication routes between PC components.

The parts of a motherboard work together to allow the full functionality of its attachments.

Modern motherboards are compound integrated circuits, which allow the assembly of home-based and personal-sized computers we have today.

Knowing the components present in a motherboard can help you understand how to build your very own PC.

What Are the Different Parts of a Motherboard?

Two models can have exactly similar motherboard parts and functions.

Still, the board’s physical arrangement may not be the same.

Although the layout and quantity of components vary from board to board, they generally use the same materials.

Before tackling each of the parts’ functions, let’s look at the various physical components present in them.

The part that holds everything together is the printed circuit board (PCB).

A PCB is a thin board made with layers of laminate materials, such as fiberglass or composite epoxy.

It is called a printed circuit board because the circuits, or the conductive lines, are “printed” or chemically etched into the laminate.

These serve as electricity and information pathways.

The conductive pathway is usually made of extremely thin copper strips.

Think of a PCB as a replacement for a mass of entangled wires that connect all components.

PCBs come in different shapes, sizes, or form factors, the most common of which include the ATX, Micro-ATX, and Mini-ITX.

The form factor dictates the number of sockets, slots, and connectors available for a PC build.

It also dictates how much space is allowed for capacitors, resistors, VRMs, and built-in microchips.

You can find a socket, slot, or connector at the end or junction of a conductive pathway.

Sockets and slots allow the installation of PC components such as CPUs, GPUs, RAM modules, storage devices, and expansion cards.

The terms “sockets” and “slots” generally refer to the more essential connections a computer requires to function fully.

Peripheral connectors are either for support or secondary connections.

Secondary connections refer to connectors that may not be necessary for complete PC functionality.

These secondary connectors include USB and RGB lighting headers.

All electronic devices, such as a motherboard, require passive electronic components to regulate electric current flow within its circuits.

They are two-terminal devices that do not produce energy and do not require electricity to operate.

A capacitor opposes voltage change as it stores energy in an electric field.

An inductor opposes current change as it holds the same in a magnetic field.

A Voltage Regulator Module (VRM) comprises a transistor, an inductor, a capacitor, and a controller microchip.

What it does is appropriate the correct amount of voltage that enters a microprocessor.

You will see built-in chips on motherboards as tiny squares surrounded by small metallic pins attached to the board’s circuitry.

The principal built-in chip you can find on most motherboards is called the chipset.

The chipset is responsible for the connections between the CPU and the storage, integrated hardware, and I/O controllers.

Based on most modern motherboards, a chipset can either be manufactured by AMD or by Intel.

Formerly known as the Southbridge, it initially came with the Northbridge.

However, this has been removed since AMD and Intel made CPUs that integrated the Northbridge.

Other built-in chips you can find on the motherboard include audio, video, overclocking, and fan controllers.

In addition to these controllers, there can also be built-in chips that are network adapters, temperature sensors, PCIe switches, and flash memory.

You may see oddly-shaped metallic fins in different parts of the motherboard.

A passive heatsink has no mechanical components, making it more reliable than fans or blowers.

It only uses passive convection to dissipate ambient heat.

With that said, it is still better to have continuous airflow passing through the fins.

Passive heatsinks can either be made of aluminum, copper, tungsten, silver, beryllium, or an alloy of these metals. 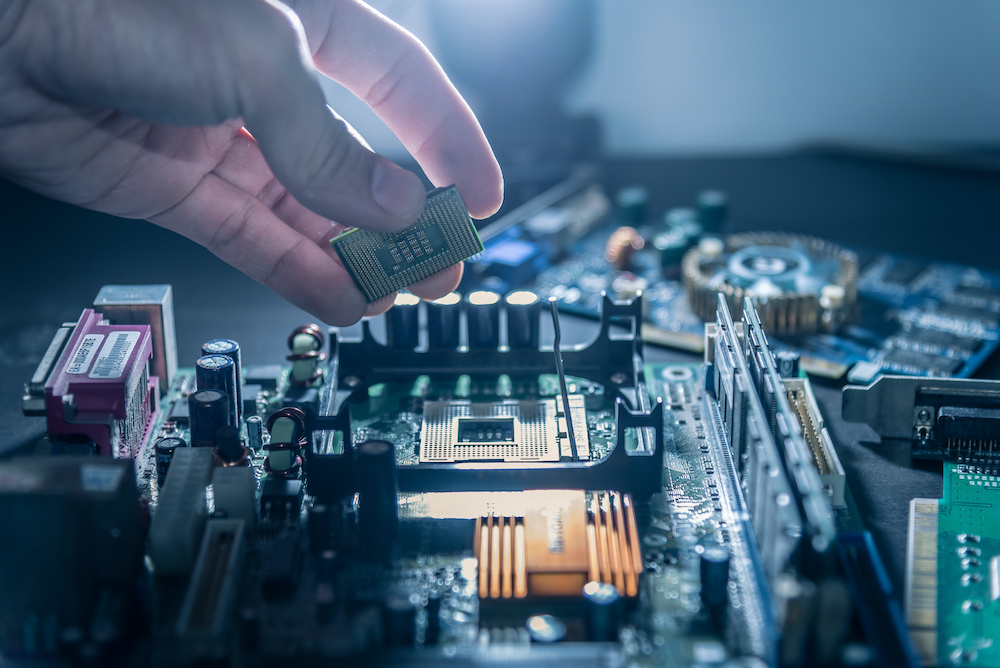 What Are the Main Parts of a Motherboard?

Motherboard parts and functions can be identified by defining the various components a computer requires to operate.

As the motherboard is the primary component for power delivery and communication, none of the other PC parts will function without it.

All computer motherboards have at least one flash memory chip for storing the Basic Input/Output System (BIOS) settings.

A motherboard requires a socket to provide power to and communicate with the CPU.

This distinction means that the type of motherboard and CPU is dependent on one another.

You cannot use an Intel CPU with a motherboard that has an AMD chipset and vice versa.

A CPU socket is typically the most significant square socket you can find on a motherboard.

It has multiple pin-sized sockets that determine the type of CPU it can accommodate.

The socket usually has a metal brace to secure a CPU and its cooling attachment in place.

These slots are directly connected to the CPU socket, and their functionality depends mostly on the type of CPU.

Other connections to the CPU socket use the peripheral component interconnect express (PCIe) technology.

PCIe technology uses a controller built into the CPU to handle data transfers across PCIe slots.

Each PCIe slot has several lanes that can handle multiple connections in a single data transfer cycle.

The number and size of PCIe slots vary from board to board.

They determine how many storage and expansion devices you can connect to the system.

PCIe slots differ in physical configurations based on the number of lanes. A slot can have x1, x4, x8, x16, or x32 lanes.

The most common slots present on a motherboard are the x1, x4, and x16 lanes.

In addition to PCIe slots, other storage slots are either called SATA (for Serial Advanced Technology Attachment) or M.2 slots.

Depending on the motherboard, an M.2 socket can be directly connected to the CPU or through the PCIe lanes.

A motherboard and all the components connected to it require a power supply unit (PSU).

What the board does is distribute power and current from the PSU using power connectors.

The main power connector connects the motherboard directly to the PSU, and it uses a 24-pin ATX 12-volt version 2.4 socket.

The voltages set to travel through these pins are 3.3 volts, 5 volts, or 12 volts, although the actual amount of current that can be drawn is dependent on the PSU.

The CPU draws power from the 12-volt pins.

However, it can have an extra eight-pin and four-pin connector for transporting more power from the motherboard.

Power connectors on the PSU use color-coded wires for identifying output direction.

Apart from the main power connector, a good motherboard has several cooling connectors for supplying power to fans and cooling pumps.

An electronic device like the motherboard generates variable amounts of heat as it consumes electricity and processes information.

The primary input and output connector set is located along the motherboard side that attaches to the back panel of a PC.

It includes display and audio connections, USB, and PS/2 ports.

RGB headers have been included recently for aesthetics.

The best RGB motherboards have built-in connectors for controllable RGB lighting aesthetics so that you can enhance the overall look of your PC.

You can also find diagnostic tools present on a motherboard.

Most motherboards have diagnostic LEDs, while some also have debug displays.

Both are used for motherboard and component troubleshooting.

Onboard on and off switches and BIOS flash buttons can also help in PC setup and diagnostics.

Parts of a Motherboard (Key Identifiers)

Getting to know the parts of a motherboard is relatively easy.

Associate shapes with each name and use the forms as key identifiers of all the parts.

Alternatively, if you want to know the exact parts of a particular motherboard, your manufacturer gives out the diagrams through its website.

If you look at these diagrams, it is also easy to assign shapes as key identifiers to parts.

Motherboards are developed in tandem with innovations in PC components, such as CPUs and GPUs.

Although components continuously improve, they maintain socket shapes on the motherboard that are more likely to stay the same in the foreseeable future.